I’ve been working on a homebrew portable GMRS repeater for deep-desert adventures with a friend off and on for a while now.  The project will get a post of its own one of these days (read: if I ever get the controller to work), but I thought I’d share some useful info around the radios I’m using as the guts of the machine.  There is great info online for modifying these radios, but I had a newer hardware revision that required some extra work beyond what’s already been documented.

I picked up a pair of Kenwood TK-805d UHF mobile radios on eBay about a year ago for this project.  The main draw of this model in particular was that it is actually FCC Part 95 accepted, meaning they can be used legally for GMRS.  They are front-panel programmable (with a few tweaks), eliminating the need for custom programming cables and DOS virtual machines like I had to go through for other older Kenwoods.  And best of all they’re readily hackable.

Most of the info you’ll need to get started with modifying these radios is covered in a great document by Dwayne Kincaid, WD8OYG (mirrored here for posterity).  I largely followed his instructions.  I removed the audio port as described, ran a DB9 cable in through the opening where it had been, and began making the connections to internal signals.

The radios I had must be a later revision than the ones WD8OYG modified, since the Tone connector leading to a separate board was not present on my front panel PCBs.  This is important – it’s where I was supposed to tap the RX CTCSS signal so the repeater controller knows when an incoming signal is present.  In its place I had an additional large IC, looking to be another CPU.

I was able to find a full service manual with schematics and IC pinouts for the TK-805d (original | mirror).  Sure enough that second CPU replaced the external Tone module.  The signal I needed was still present, but now only routed between the ICs (that signal is /DETSS into Pin 7 of IC203).  By way of R256 it is routed to Pin 2 on IC204, the additional CPU present on my radio.  See annotated schematic below. 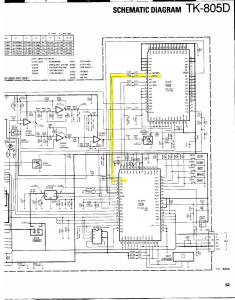 I got confirmation of this from another section in the manual that describes the pinouts of the CPUs.  The description “signaling match/mismatch” refers to matching the CTCSS tone or DCS code programmed for the channel.

I ended up soldering directly to Pin 2 of IC204 to tap the RX CTCSS signal.  You’ll want a steady hand, a fine iron tip and something to hold the wire.  Here’s a good shot that shows the connection and how I routed all the wires from the front panel back into the radio.  It’s easy to pinch a wire putting everything back together if you’re not careful with the routing, and if you’re soldering straight to the CPU as I did you probably won’t want to risk breaking that connection.

Don’t forget to test everything while you have the case open!  These two radios have been working without issues since the modifications.  I also reduced the transmit power level to around 5 watts by measuring current draw while adjusting VR5, as described in WD8OYG’s original directions.  A more modest power level is fine for my use case, and will make the radio much happier with the increased duty cycle of repeater use.

When you’re ready to program frequencies, see Page 10 of the service manual linked above, or follow instructions on this RadioReference thread.  You’ll need jumper CN8 set internally before it’s allowed, but this was already the case on both radios I purchased.  The procedure is a little clunky, involving much scrolling of the front panel knob and clicking the PTT button, but hopefully you won’t need to do it too often.

73s and happy hacking!  If you do this mod yourself or if you encounter yet another hardware revision of this radio I’d love to hear about it.