After getting comfortable cutting holes in vehicles this year with all the van modifications, it was finally time to do my semi-stealth ham radio install in my 2008 Prius (Gen II).  To preserve the look of the car, I replaced the stock AM/FM antenna with a shark fin antenna and installed an NMO mount directly behind it for a mid-sized dual-band antenna.  A Yaesu FT-8800R dual-band 2m/70cm radio was installed, with the head unit mounted above the rearview mirror and an external speaker on the floor under the dash.

The shark fin antenna connects to the antenna base after removing the stock whip.  The base actually contains an RF amplifier, which can only help when you’re reducing your antenna size – even with the smaller fin antenna it’s still an active configuration.  I have not noticed all that much difference in FM broadcast reception with the shark fin vs the stock whip.  I might lose signal a little earlier when going into a parking garage, but I haven’t found anywhere outside where I lost coverage from the change. 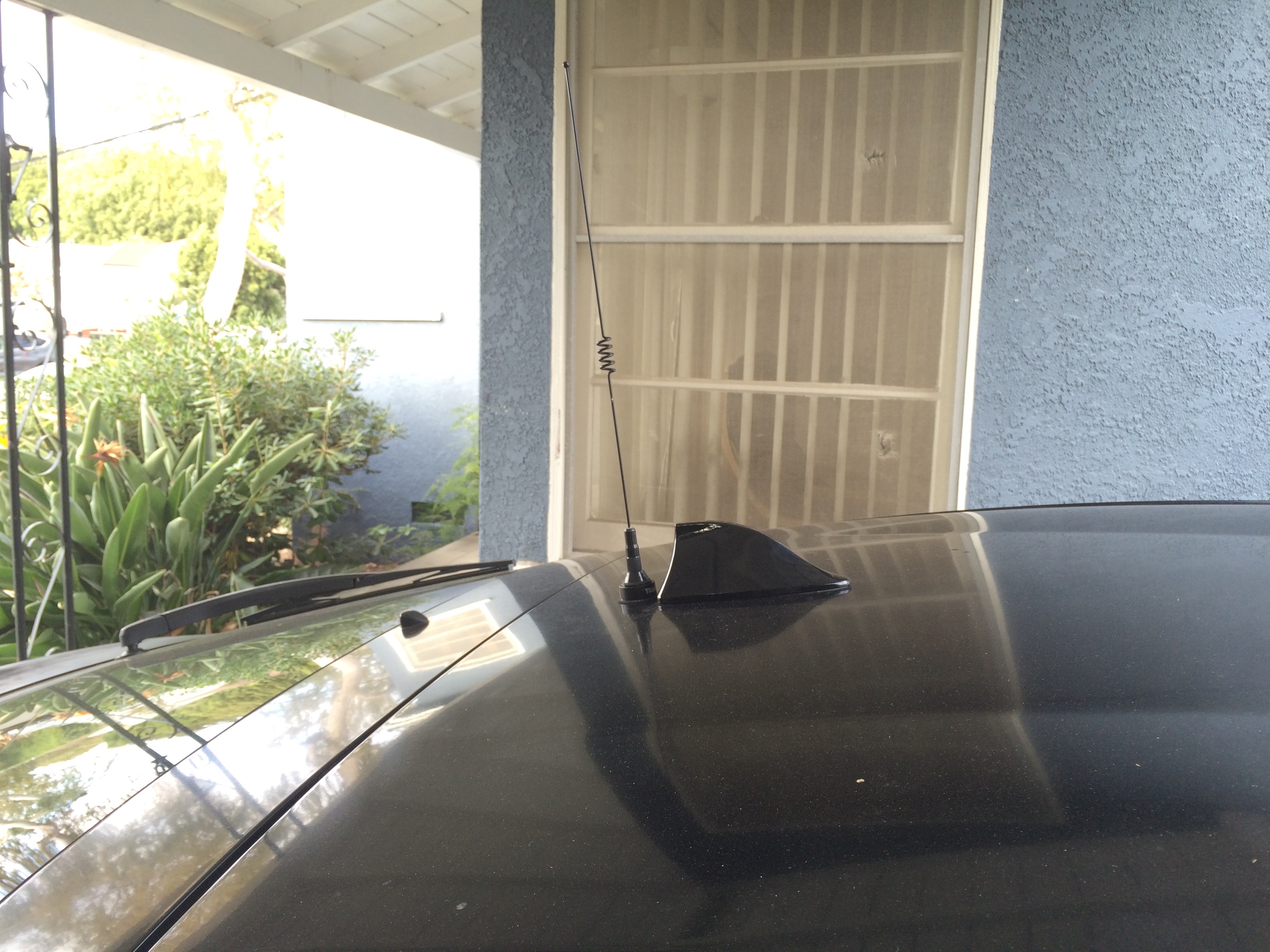 The nice thing about working on a Prius is that Toyota made the thing pretty modular.  No special tools were needed to take the headliner down in order to drill the hole for the NMO mount.  I’ll direct you to this very helpful page for headliner removal instructions.

The antenna is a basic Tram 1181 dual-bander.  Inexpensive but so far pretty sturdy, the same model on my van has survived several years of off-road abuse.  The mount is brass and the whip is fairly thick. Added bonus of being roughly the same length as the original Prius AM/FM whip.  Unity gain on 2m and 2.5dBd on 70cm, which is fine for me being in the LA area where repeaters tend to be high up on mountain tops and a narrow-beamwidth high-gain antenna would not necessarily help.

The radio chosen was a Yaseu FT-8800R.  The radio body itself is mounted in the trunk under the floor in the left side compartment.  I ran the coax from the antenna mount down the left side of the car and out the brake light bulb access panel, with that two inches or so into the trunk floor being the only exposed wire run in the car. 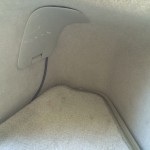 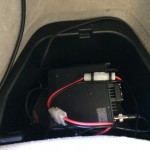 The radio head is mounted above the rearview mirror on a mount originally intended for dash cameras.  It mounts to the post that supports the mirror, not the mirror itself. 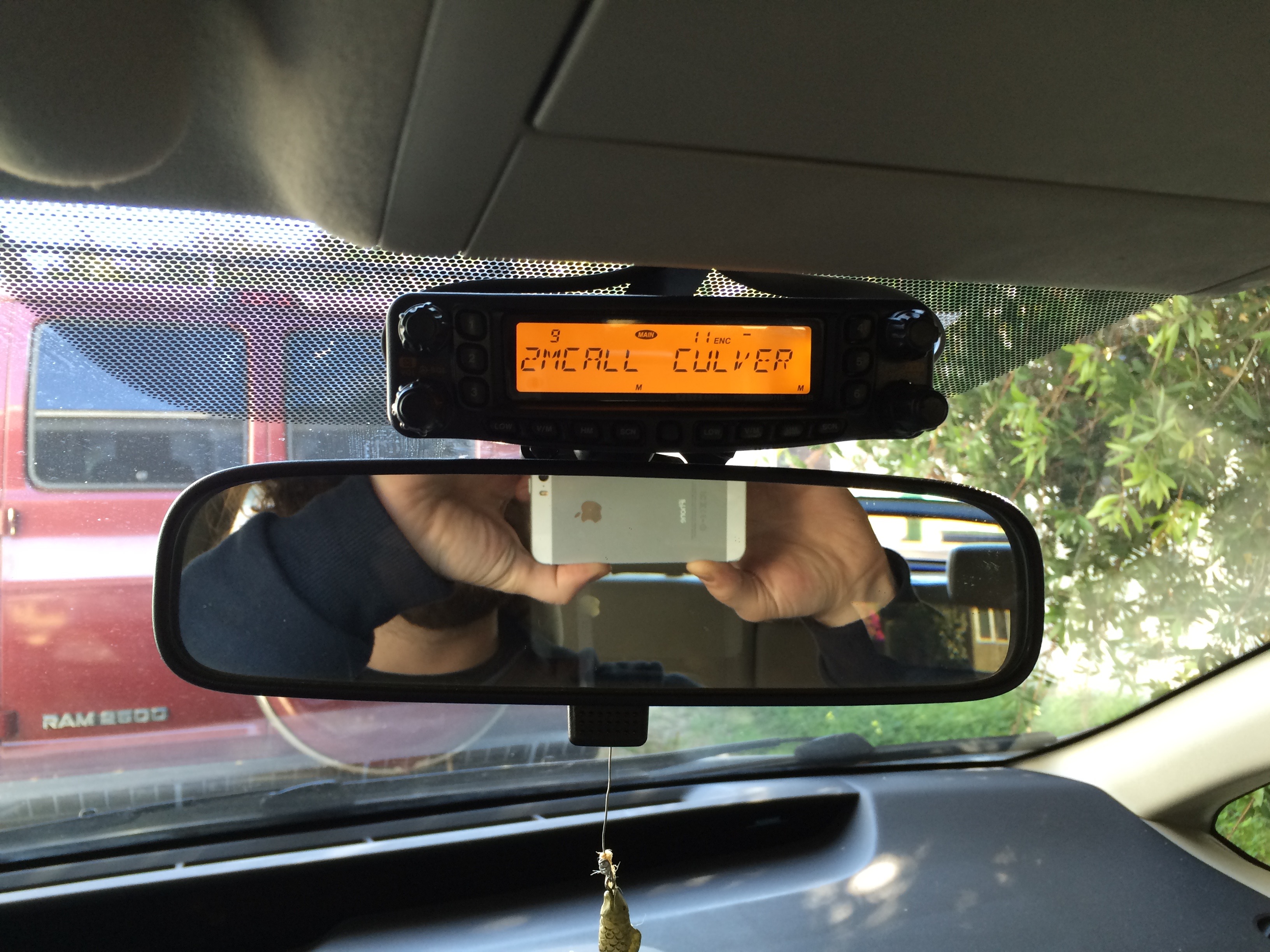 The mount came with attachments for a number of dash cams – using the attachment for a standard tripod screw I was able to attach the mounting bracket for the head unit with no modification. 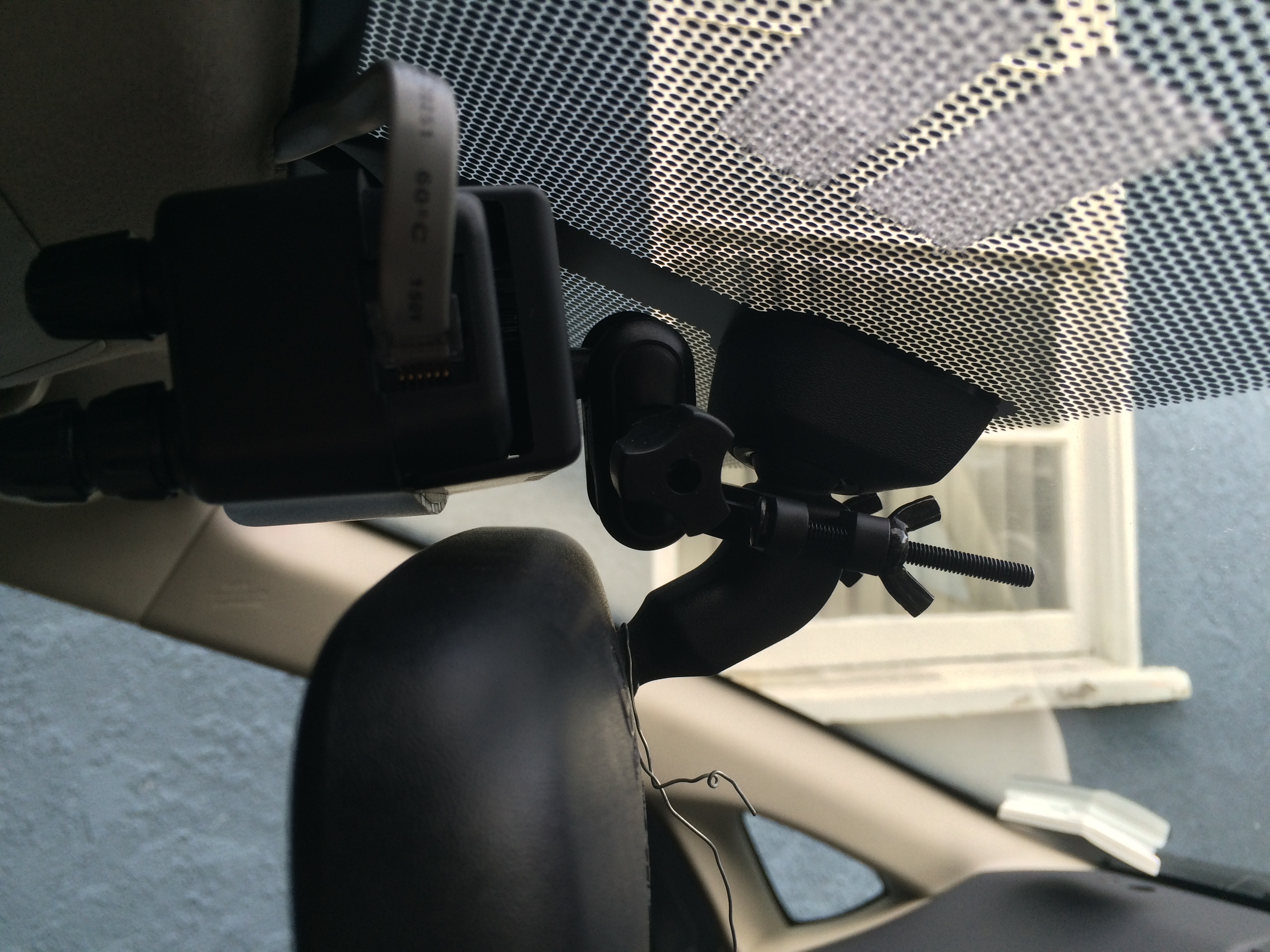 Detail of the mount.  It attaches directly to the post and does not move with the mirror.

The mic is routed with an extension cable down to the driver side of the center console.  I used a simple RJ12 six-pin straight-through cable (or “data cable”) and a female-to-female coupler.  I put sticky Velcro (hook side) on the coupler and use it to anchor the base of the coiled mic cable to the floor near the back of the driver seat.  That way the cable comes up neatly as I raise the mic and drops back down between the seat and the center console when I place it back in the holder. 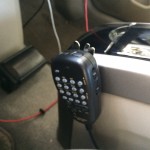 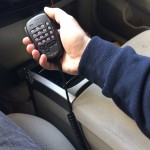 The cup holder portion of the center console comes out easily if you pull upwards, which made it easier to install the mic holder.

Of the various cheap ham / CB external speakers on Amazon that I have tried I found this one to be the most to my liking.  To me it sounds like it rolls off the high frequencies a bit and makes the Yaesu beeps less in-your-face.  The extension cable runs from the radio in the trunk along the left door trim with the head unit wire and then under the dashboard to the center.  The speaker itself is mounted with velcro to the carpet, which has proven plenty sturdy so far. 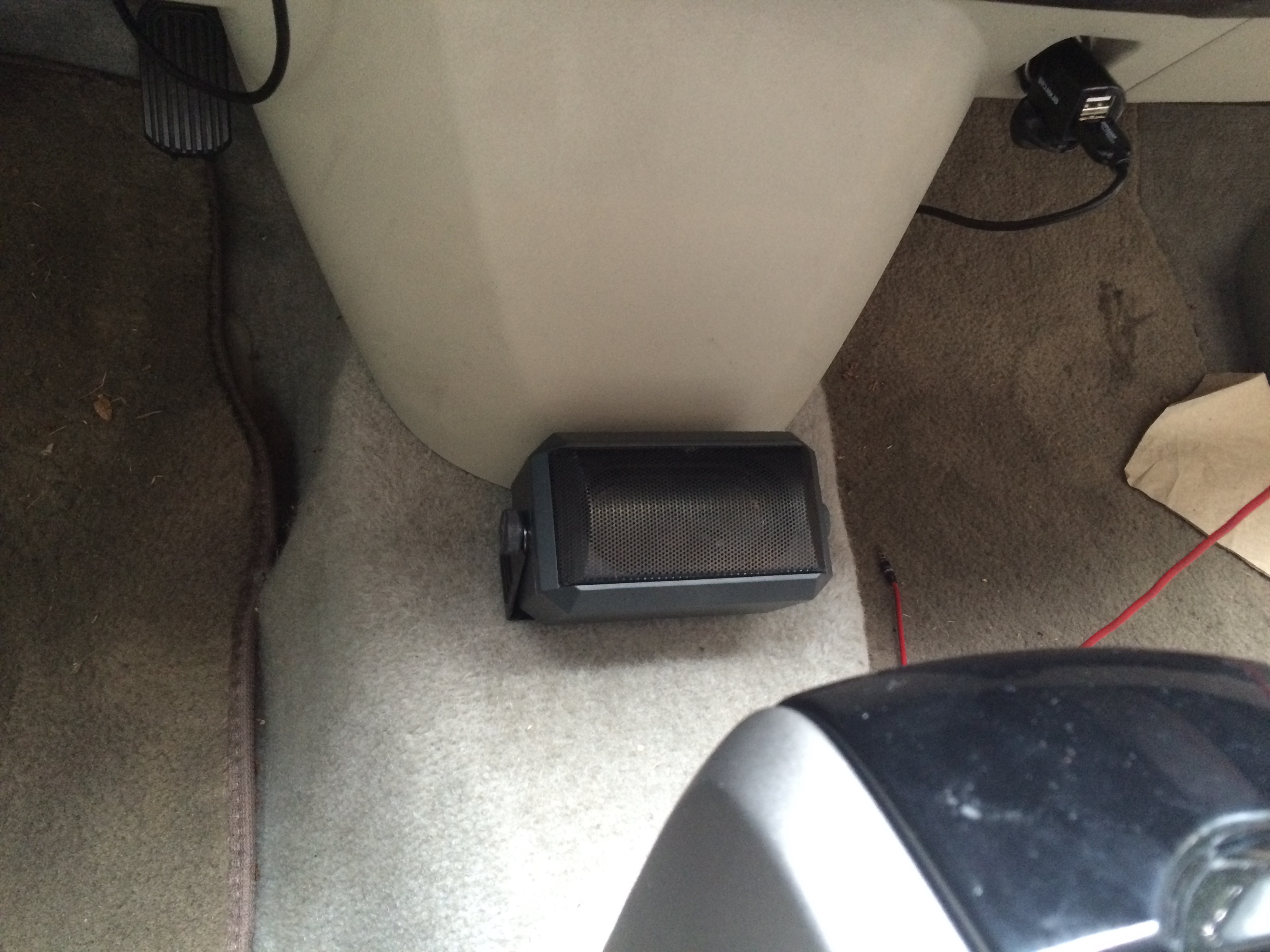 External speaker on the floor beneath the dashboard.  (This picture was taken before the mic holder was installed on the center console.)

So far I have been quite pleased with the installation.  Performance has been good – my experience with those cheap Tram antennas continues to be that they perform better than one might expect for only 18” when you install them properly (a.k.a. when you get past the fear of drilling holes in your car).  I can hit a UHF repeater that’s about 60 miles away and no trouble with the local repeaters.  Good performance observed on simplex as well, car-to-car and car-to-handheld.

This setup is working well enough for wideband receive. The Yaesu has AM decode for air band frequencies, and I have a hyper memory preset to scan the local arrival and departure traffic.  Antenna height is obviously a factor and hearing ground stations can be spotty, but performance is good enough to be entertaining.

The net result visually is quite clean.  Many people who I’ve had in the car did not even noticing the extra equipment unless I pointed it out.  The car still looks like a stock Gen II Prius on the outside for the most part, unless you notice that little loading coil in the whip…