The advent of inexpensive Bluetooth- and serial-based TNCs make a compelling case for present-day hams to get into packet radio and APRS.  The Mobilinkd Bluetooth TNC in particular presents an attractive proposition: a little $65 box, a $30 Baofeng radio and that old Android phone sitting in your desk drawer is all the hardware you need to join in the fun!  Over the past couple weeks I have been testing a Mobilinkd TNC2.1, various Android devices running APRSdroid and various Baofeng radios, and while I’m pleased to report the TNC and software side of things worked well, the limitations of the cheap Chinese handhelds become quite apparent in difficult RF environments and for me were not enough to do the job. 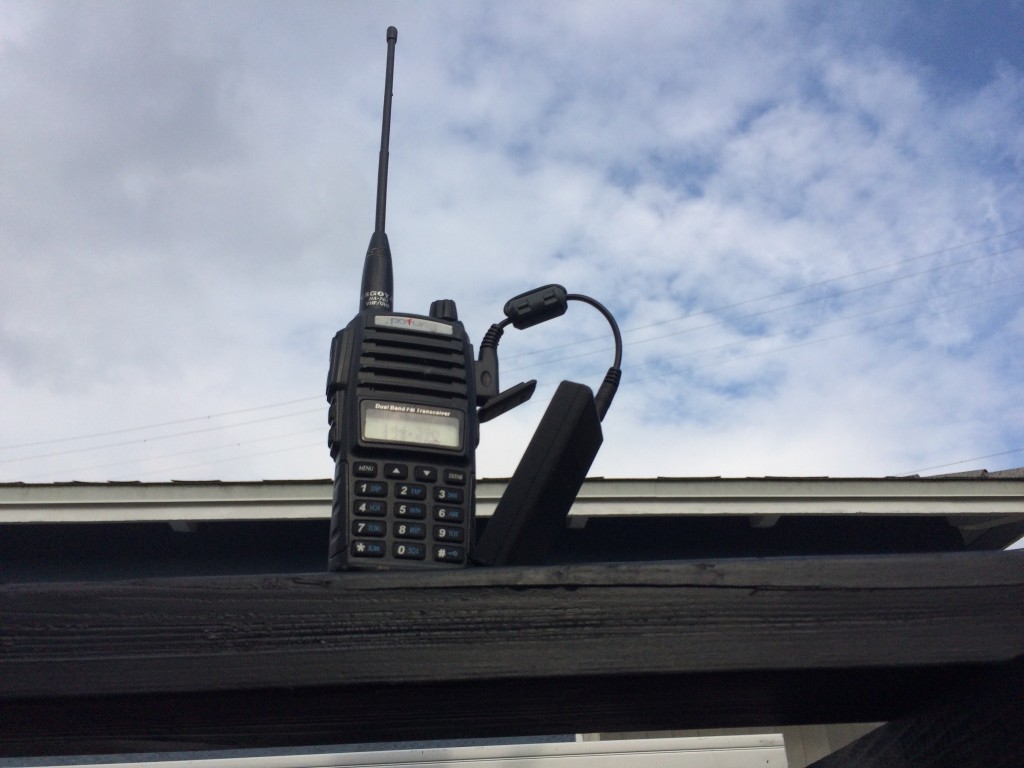 Baofeng UV-82 and Mobilinkd TNC2.  I observed better packet reception with a handheld antenna than with a base antenna due to desense.

The Mobilinkd TNC is fundamentally a clever Arduino-type circuit.  The MCU generates AFSK tones with a timer / GPIO, samples the incoming audio with the onboard ADC and all the decoding is done in software.  Add a Bluetooth serial module and a rechargeable battery and you’re set.  While you could build this yourself (indeed they show you how and the firmware is open source) the production device and companion app is well worth it if you plan for your system to leave the lab, which is kinda the idea with APRS.

The TNC has a custom plastic case, clearly 3D-printed but quite solid-feeling for its size.  There is a single button to power on/off, a micro-USB port for charging and a 1/8” TRRS jack for the radio interface.  On both the hardware and software side everything worked as designed and I did not encounter any bugs or glitches.  Actually the TNC and companion app were the only things in this APRS setup that worked first try.  I’m quite impressed with the stability and maturity of the user experience, I was expecting this to feel like much more of a science project than it ended up being.

My original plan was to use an inexpensive 7” tablet as the APRS interface, mounted somewhere on the dash or in the cab, being a bit easier to see than a phone would be.  (One of my primary use cases for APRS is keeping track of friends while off-road.)  I purchased the cheapest tablet on Amazon that had both Bluetooth and GPS, and promptly returned two in a row due to hardware defects.  On the one that was usable through the row of dead pixels I was able to give the software a test, and found big issues there as well – the offline OSM-based version of APRSdroid would not render maps properly, and the USB debugger poking around I did suggested something was very wrong with the SD card driver.  Needless to say I did not try a third unit.

I did some digging in the garage and found my old Droid Incredible, my first smartphone, from late 2010.  Pleased to say it started right up once the battery had some juice in it, and had no trouble getting APRSdroid running, for either the standard Google Maps or the OSM version.  Heck, there was even an Android software upgrade available.

Here is where the trouble started.  I have had some desense / overload issues in the past with Baofeng HTs attached to proper external antennas.  Two years in a row at Burning Man (in northwest Nevada) I had an issue where any external antenna above about 8′ AGL would cause the squelch to stay open most of the time on both UV-82 and UV-B5 radios, regardless what frequency they were set to and PL settings, etc.  The antennas worked great on various mobile radios we tried.  The desert is filled with all kinds of weird military and heavy industrial things, and I guess there is some signal out there strong enough to wreak intermod havoc on the sad little Baofeng frontends.  Using the stock rubber-duck antenna and even upgraded HT antennas the radios work fine, as their sensitivity is quite good when you don’t have so much QRM making it through the frontend that it can’t hear anything else.

It looks like the same issue is present here in Los Angeles.  I have two antennas up at my house currently, a broadband discone in the attic that usually feeds my scanner but works fine for 2m transmit, and a N9TAX dual-band slim jim on a fiberglass flag mast.  On either antenna my Yaesu FT-8800R mobile rig hears a pretty constant stream of packet traffic, something would come in every 5-10 seconds at slowest.  But with a Baofeng hooked up to either antenna, even with squelch turned off, I heard… no packets at all.

I ended up testing two different UV-82s and a UV-B5, on each antenna, while using the Yaesu on the other antenna to verify that packets were in fact coming through.  The UV-82s heard zero packets.  The UV-B5 heard maybe two or three packets in the half-hour I left it running.  The transmit side was fine however, as would be expected.  Using a UV-82 into the discone I could send packets and have it picked up by the South Bay digipeater, which would then make their way to an IGATE and show up on aprs.fi.

I repeated the test using a ducky HT antenna and brought the setup outside.  The UV-82 was now able to hear occasional packets, though still at about 1/50 the rate that I could hear them on the mobile radio.  Transmit-wise though I was no longer able to hit the digipeater.

If you’re hiking or deep in the desert or within a couple miles of a digipeater, a Baofeng-based APRS setup would work fine as a tracker.  But don’t count on its ability to receive very much.

The Mobilinkd Bluetooth TNC setup however works great, so my next move is to get it hooked up to a proper mobile radio.  Stay tuned…